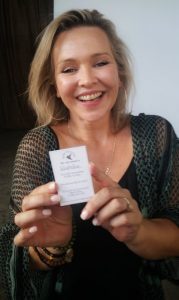 I met Carla Bonner at an event. Carla is one hell of an inspiring woman; she openly shared her journey to wholeness and what it took for her to become an actress; from the determined 10 year old girl calling up agencies until one of them said yes, to the young woman who despite the odds landed the plum role of Stephanie Scully in Neighbours, and to where she is now in her life as an empowered woman.

Becoming an actor wasn`t an easy path for Carla to follow and it took considerable focus and determination for her to override the lack of support and body shaming she endured from family members – “Unless I looked a certain way I wasn`t considered good enough’’ said Carla. I felt myself empathizing with her. Young girls are so sensitive about their appearance and negative criticism can really shatter their confidence in themselves. Despite this adversity, Carla`s dream remained intact and she persevered until finally she got the Neighbours role.

Carla spoke candidly about the highs of being cast in a popular TV show and the emotional lows that arose as an older actress when her character got written out of the show and she left Neighbours after 11 years. I couldn’t even begin to imagine what the pressure to look young must have been like for somebody in the public eye like Carla. As an aging woman myself I am well aware of the ongoing barrage of anti-age products being marketed to women over 35; the subtle (and not so subtly) insinuations that to be happier and more complete as a woman, or to get the guy…and keep the guy, or nab that perfect job you must look younger. For Carla, this period triggered a time of massive self growth and personal liberation.

Carla has spent much time healing her inner child and working on self love – “I`m still a work in progress but I love who I am now.” Nowadays Carla can mostly be found on the other side of the screen, teaching people acting skills at her Acting For Film And Television School. She is in a good place emotionally, and loves sharing her knowledge and skills with others, as well as learning new things herself.
I found Carla to be wonderfully down to earth and a real sweetie pie. Her journey from shame to self-love is one that many of us could relate to.

Get all latest content delivered to your email a few times a month. Updates and news about all categories will send to you.
Close Menu