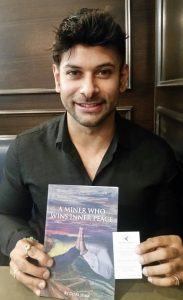 My chatting journey has guided me to connect with so many interesting people with fascinating and inspirational life stories.
Married At First Sight celebrity and author Dino Hira is certainly one of them!

Dino and I met up over a steaming mug of hot chocolate, and chatted at length about mindfulness, self-healing, gratitude and the importance of meditation. What immediately stood out about Dino was his humble manner and complete lack of airs and graces. His demeanor was consistent with his attitude; “You need to make the most of each day because life is short.” I agreed with Dino’s sentiment, and listened as he shared with me his story; from having been a miner with mental health issues – contemplating suicide as an escape from emotional pain – to accessing the mind shift which propelled him forward on his self realization journey. Dino explained it simply. In a bid to find happiness, he had spent much of his time looking outwardly for happiness, peace and love, depending on other people, possessions and external stimuli to fill himself up with, rather then going within to find the joy he sought. Once Dino changed his perspective, focusing inwardly on gratitude and positive intention, his whole world transformed; it didn`t take long for him to discover that self-care and positive thinking were the ticket to manifesting your dreams, and creating the life you wanted. Not long after this discovery, he appeared on Married at first sight and wrote his first autobiographical self-help book – A miner finds inner peace. This was a game-changer for Dino, which not only connected him to his passion for helping others find their way to joyful living, but was a massive accomplishment that helped him to grow; “Plant a little seed that will turn into a flower that serves you.” I loved his enthusiastic attitude, it was easily understood with its positive affirmation accessible to anyone. Interestingly, we both credited Reiki as being the early influence that switched the light of consciousness on inside us.

I asked Dino if he had any advice for people who were struggling with life. His advice was; ‘Get out there and strike up a chat with people who will listen to you.” He emphasized the importance of waking up and focusing on grateful thoughts;- the roof over your head, food on your plate, a bed to sleep in, keeping it simple; “Small steps can make a big difference,” were Dino`s wise words. I certainly didn`t doubt him, especially given the way that he had transformed his own life into such a joyful and abundant sanctuary.

My meeting with Dino was really special and left me feeling happy and somewhat recharged. It`s not every day that a beautiful soul enters your world to remind you about what`s really important in life.

Get all latest content delivered to your email a few times a month. Updates and news about all categories will send to you.
Close Menu